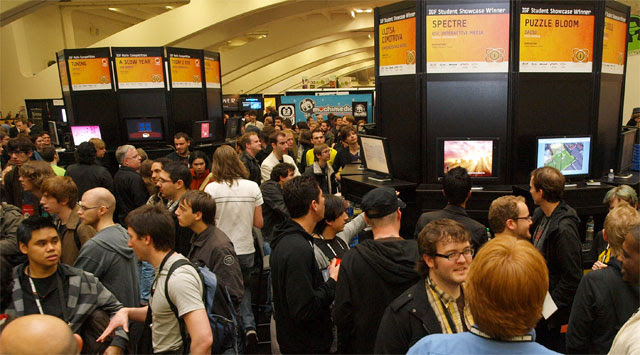 i say this after having a wonderful time at IndieCade last week, and having just submitted my game Problem Attic to the IGF a few days ago.

the expectation placed on any so-called "indie game" to distinguish itself from the pack is much, much higher now. this might seem like a good thing, right? there are a lot more games now, so the stakes should be higher - and the games should be better, right? it, of course, depends on how you define "better". but this expectation has little to do with artistic or creative ambition and a lot to do with how professional-looking the game is. the end goal the forwarding of these games serves is to make "smaller games" become a new, viable, sustainable part of the games industry. everyone knows that Minecraft/Humble Bundle make tons of money, so a lot of people are pouring a lot of resources into getting in on that money.

this is a pretty violent shift from even five or six years ago, when a game like Passage was praised for being a unique achievement in game storytelling - where it was seen as a wildly left-field part of a new artistic vanguard. now it's becoming more apparent that a game like Passage was extremely lucky to benefit from there not being much else around to diminish it. now we can also see more clearly how conservative of the narrative of that game is in many ways - about a man and a woman and compromises they make, and how cliched the ideas behind it have become. now we can see how many games tried to be as artistically ambitious and less essentialist (i'm thinking of something like increpare's "Home") but never got nearly as much attention. now it would just look like a little experiment, one of many out there. it might get some coverage on a few indie gaming sites or get posted on freeindiegam.es and then that would be it. the conversation wouldn't sustain itself because there'd be something new to replace it in a week or less.

yes, it's easier to make a game than ever. the tools are much more accessible than they ever were before. and no, i'm not a person who believes that everyone making games (or art in general) is in any way bad at all. it's a wonderful thing, especially for the legions of the population who would otherwise be intimidated away from even attempting to try to make a game.

yet it's also hard to know in what spaces those games will be appropriately recognized and respected. things like the IGF and IndieCade might seem to be those spaces, but actually serve well those who have the ability to engage in a sustained PR to promote their games. this obviously benefits people with more resources and connections, who are almost universally not the type of people who would normally be scared away from making games. this is no secret. these festivals exist as a way to inject lifeblood into the games industry, or to legitimize games in the eyes of other industries like the film industry, not to subvert them.

festivals are supposed to be a bastion for new, ambitious developers to bring their game to a wider audience. but are festivals really developer friendly at all? for most developers, it's 95 dollars for the small hope that your game will reach a larger audience. except that it's more or less impossible for your game to be nominated unless you've waged an extended PR campaign for your game or are already a well-known developer. even for those who get in, they're expected to fly out to a conference and stay there (a flight which may or may not be paid for, other accommodations and food/drinks which almost certainly won't) and stand in front of a screen in a crowded expo floor for hours on end as people while people stumble their way through their game. this might be an acceptable sacrifice if there was just one festival - but there are many (the IGF being still the biggest) and there are a great number of games being exhibited at each of these festivals. each game is like a little tidbit, a little unit of ideas or concepts to be gorged on and eventually become absorbed into the industry. and so festival settings are fundamentally not served at all for slower or longer games - and particularly for text-based games. we don't value what these games may or may not have to offer. the nuances get glossed over because of the setting. we gorge on each one rapidly and leave. this is how we've been taught to treat videogames.

and personally, as someone who's designed a couple deliberately abstract games, there's nothing that sounds more like agony to me than being expected to explain and justify my game to any random person who walks by and plays it for five minutes. the Steam deal promised to developers nominated for last year's IGF was certainly a good thing, but that's only one festival of many - and a lot of the developers lucky enough to have the kind of PR clout to get in with the judges are also probably lucky enough to get on Steam without needing a nomination.

i admit it. some of these are my own realizations after designing a game (the aforementioned Problem Attic) that was in many ways unique and artistically ambitious, but i also recognized would not in any way be "festival-friendly". in itself, it might seem like a ridiculous idea that an artistically ambitious game wouldn't be "festival-friendly" - but in fact it makes perfect sense. festival jurors tend to self-consciously cherry-pick and reward the things with the most buzz. why? in order to make games more of a cultural event, for one - and to reward games which have managed to achieve some level of cultural penetration. there's also the practical matter of judges are going to naturally gravitate towards games or developers that they've already heard of, especially among the waves of games they haven't. and also to be what a good friend of mine calls a "photogenic indie" - something that's unique in maybe one or two ways but manages to overall have highly agreeable, unambiguous presentation. that's what people want to play, after all, right? they want the gloss, not the ugly, gross shit that shows its videogamey seams. that's what prominent members of the indie community or events like the IGF or IndieCade want to forward as examples of videogame expression.

i will say that IndieCade was in several ways a lovely, forward-thinking event. it made an effort to have events like Night Games that the public could attend (though the lines were way too long for them), and also stayed lax about checking badges, allowing people to go to talks they might not be able to get into if they really wanted to. but as far as the festival goes, i've also received some of the most condescending feedback i've ever had. here are the two worst offenders (click to make it larger): 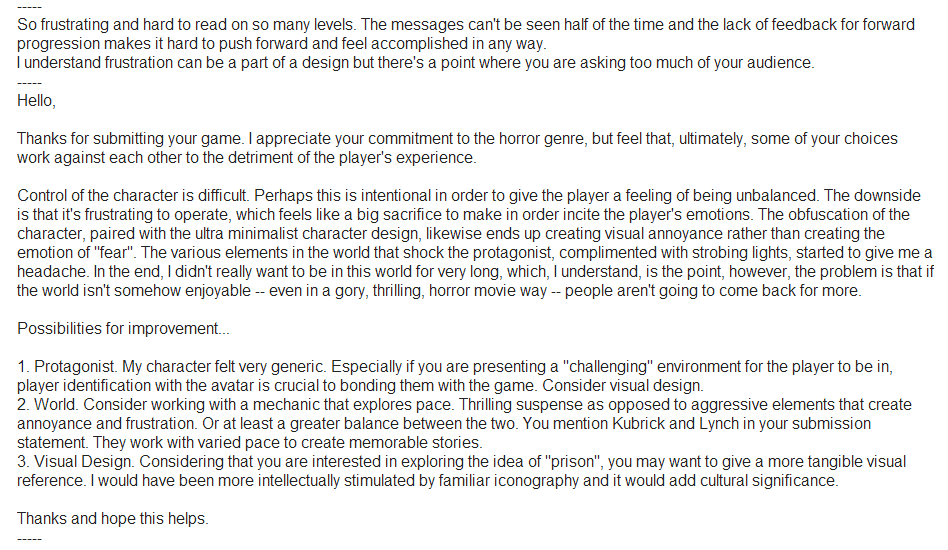 one judge says i'm "asking too much of my audience", the other seems to interpret my very intentional aesthetic choices as the fact that i must be clearly an inept and/or confused beginner (that i'm female likely plays into this), or else i clearly wouldn't have made a game like this.

i want to be clear that i don't want to make it out like i'm an exception, or that this is just about me. in many ways i'm maybe pretty lucky. i have enough friends to where if i kept waging a public PR campaign i might actually be able to get recognized in spite of how strange the things i make are, or how unpopular some of the sentiments i express in writing are. but that's not the point. the point is to aspire to have some kind of fair chance for people who can't, or won't engage in this. the point is to emphasize the people who are really, truly doing the most ambitious and crazy and unique things with videogames, and not the ones who are friends with the most judges, or who are making the most "photogenic" games. and i don't think it's possible for this to happen in any real way in the climate of these festivals.
Posted by Liz R at 2:30 AM