Indie Game: The Movie: The Review

hey! i recently wrote a review of Indie Game: The Movie. you can check it out over on Midnight Resistance
Posted by Liz R at 3:55 AM 2 comments

re: The Depth Jam and its criticisms 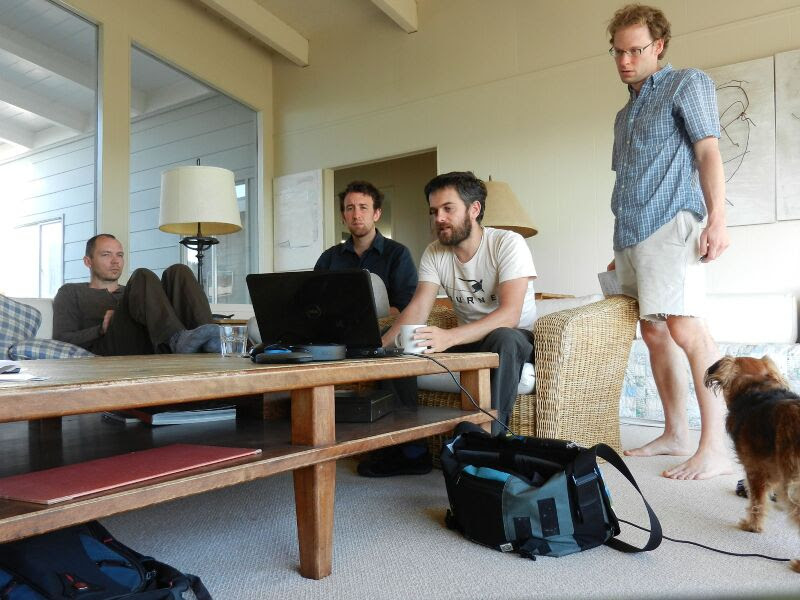 there are a few things that bother me about The Depth Jam. the biggest thing is the name, which makes it sound like some grandiose exclusive event, rather than a small-scale experiment. the fact that the participants rented a beach house, ate catered food, and appear to have a photo album with an absurd number of pictures of themselves engaged in the event don’t help that image of self-importance, but it also doesn’t say a lot about the aims of the Jam itself.

in his writeup of it, Jon Blow outlines that the idea behind the jam was to provide a space for a few experienced game developers to give each other feedback and provide the sort of meaningful input into the development of each other’s games that they might not get otherwise. it was titled “The Depth Jam” to differentiate it from other game jams, which don’t really provide a space for much meaningful artistic input. however, they do provide a more of a loose, social community space for people working on or interested in working on games. Blow concedes this point but still seems to harbor a negative opinion towards game jams in general, and the idea of a loose social interaction among people. i agree with him that most social time and energy in the tech bubble gets spent endlessly talking about the same things, and very little time is spent actually experiencing things that exist outside that bubble. but people a lot of people in technology also spend a lot of time in isolation, without many friends, so game jams can provide a welcoming space for those people.

the goal of the event is pretty noble - to allow one little instance of a space for deeper ideas to breed, but it’s difficult to say to what extent that can happen within videogame culture without some fundamental changes happening. if i were coordinating an event like this, the first thing i’d do would be to completely remove the access to technology for a few days and have the three or four participants have a required discussion of a particular book, or film, or album, or work of visual art. i would also require them to buy their own ingredients and cook food together, and would also require a hike, and maybe some sports or improvisational games, just to get their energy levels up. and then the last three or so days would be spent working on and discussing the games. this probably sounds like hippie bullcrap to some people, but the idea here is for people to go outside themselves and able to appreciate and gain meaning from the world outside their own little bubbles of technological security. that’s much more helpful and stimulating to me than catered food and lots of time spent posing for photographs... but i guess we’re just different people.

in all seriousness, in the end what i get from the depth jam article is that it’s a model that should be taken for what it is: an alternative to the traditional game jam aimed at providing some meaningful input for more experienced developers. and i do think that’s pretty noble.

it’s pretty easy to characterize the event from external appearances as an instance of a few exclusive rich white male friends who are whisked away to some private beach house to go be white saviors. i think in some ways, Jon Blow in particular has become sort of a boogeyman among people involved videogames as a representation of a pompous guy who doesn’t “get it”. to people who identify as gamers, he’s a deluded art-snob who hates all videogames. to those on the fringes, he’s the embodiment of a creepy “male gaze”-y white male. a lot of criticism leveled at his ideas from both sides seems to have a convenient target him as a person, a sort of criticism which i’ve never found particularly insightful or useful. i can’t really be critical of the fact that no non white males were invited to the jam, for example, because it’s clear that its a small-scale closed experiment done by a few friends, not an open or semi-open event with the intentions of representing a diverse array of voices within game culture.

here you could say that it still embodies what is wrong with game culture by the fact that these white males are all friends with other similarly-minded white males that they chose to participate. to which i would say, sure, but that’s a problem with social structures that exist within videogame culture, and it’s not at all unique to this event. there aren’t many non-white male voices in the videogame world, and by just throwing in a Brenda Brathwaite or a Jenova Chen you don’t really solve any problems of representation in the larger culture. and anyway, those goals being explored in that particular instance of the jam is irrelevant to the intention of the event itself, which is meant to spread and take off as its own thing, much in the way of the first indie game jam. to which you could say, they’re always relevant because they're always present in the world and i will always call these examples of privilege out for what they are. to which i would say, call out videogame culture, and call out the participants for being unaware privileged white dudes, but if you’re actually trying to criticize the jam itself you need to look at what its stated goals were, instead of just trying to characterize them into whatever negative narrative you want to fit them into. if the latter helps you feel better, fine. but that kind of approach totally shuts down the possibility for an exchange of meaningful discussion, and makes it much likelier to just create drama that devolves into name-calling. i personally find that fucking boring as hell.

(now that i’ve gotten that weight off my chest...) the other criticisms that it has an anti-community spirit don’t make sense to me, because art is a process that depends on some form of isolation from the outside world. in order to understand yourself and what you want to say, it’s important to be able to divorce yourself from the things that might have a negative or stressful influence on your own work. and just because not everyone can afford it, doesn’t mean that time away from the outside world isn’t a desirable thing.

i, personally, hope to see events like this catch on in the future, and also for the participants of this one to maybe not take themselves so seriously next time around (or at least axe the photographer).
Posted by Liz R at 7:36 AM 4 comments