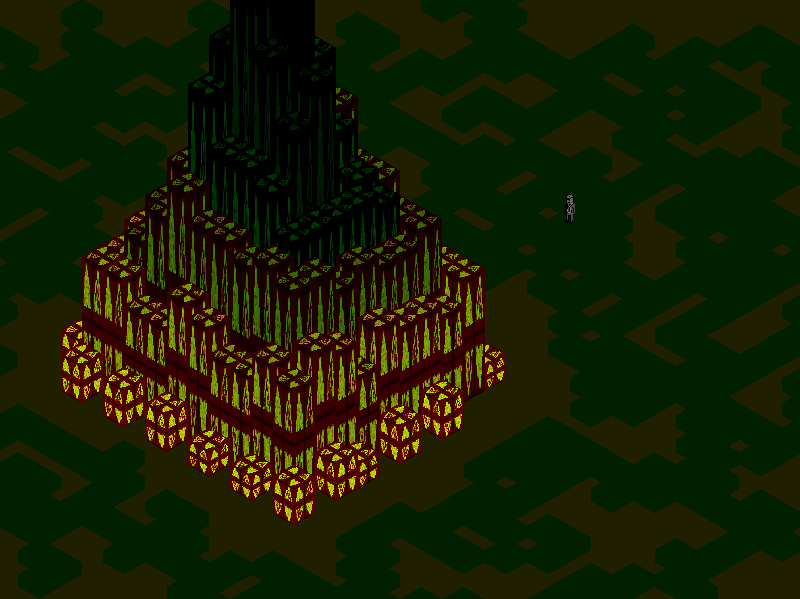 my friend Andi McClure made a promise to me awhile back that she'd do all the coding for me if i decided i wanted to design a game of my own. i've always been really nervous about my minimal artistic ability, but the opportunity was too great for me to not finally take her up on it for this past weekend's ludum dare competition. half my motivation to finish this has been out of envy for all my friends who are game developers and have been doing stuff for years, but i've shied away from since the things i did in my teens. now i finally have something i can call at least 51% my own! though it would not have been in any way possible, if not for her complete patience in dealing with my utter confusion and lack of patience for any kind of technical fuckups.

i decided i wanted to make some kind of isometric action/stealth game kind of like D/Generation. out of crazy ambition she took me up on it and made an isometric engine from scratch past week. after looking at the limits of my artistic ability and all the things that it would be insane to try to implement into the engine to make any sort of action/stealth game possible within the time limit, and not being able to decide what kind of mechanics i wanted, i worked with what we had. it gradually morphed into a Yume Nikki-style exploration game (which is what i may have secretly wanted to do all along). some of the bug/features she added to the engine are really what made a lot of the coolest looking areas like the one above possible - and i've barely even scratched the surface for what's possible.

i won't talk much about the "story" of the game, because i think the mood is pretty apparent if you play it. i don't really think i could articulate it anyway. the experience is as much about the kinds of questions you might your friend in talking about your experience - "did you reach an area with a big blue tower?" "no, i totally missed that! did you interact with the eyeball in the beginning?" "oh, i didn't know you could!" etc, etc say more than i really could.

consider this v .001 of the game. there are a billion more areas i'd like to add, and some other changes i'd like to make in the next month or so, so look for that. in the meantime, though, enjoy what's there!

and the ludum dare entry where you can vote on the game is here:

games criticism: a reader (with introduction)

a couple weeks back, journalist Helen Lewis asked in her blog for the UK publication the New Statesman why we're still so bad at talking about videogames. in that article she talked about the failure of the so-called "new games journalism" to substantially improve the larger discourse surrounding games. i agree with suspicion of the NGJ and her notion that most of the discourse surrounding games is still extremely inadequate, but our agreements end there. i saw her characterization of particular games to be a bit clueless (particularly when she said that the only real critique of a "narrator" character in FPS games is in Bioshock) and her criticism completely centered on current AAA games and commentary on them in the "major outlets" for games journalism, as if valuable and meaningful discussion couldn't possibly be happening anywhere else, or about any other games. it irked me so much that i finally decided to email her. this is what i said:

i feel very strongly that (as i said on twitter) there is a revolution in game criticism starting to happen, but it's happening outside of the major media sphere. at least in my case, if you're a new writer who wants to engage others with some kind of honest, serious criticism of videogames, you're probably not gonna look to try and get it published in the same major outlets that you view as part of the problem in the first place. it's the case now, at least more than it was before, that you can still get a fair number of views (though definitely not in the same numbers) through a personal blog - and you don't have to worry about the format and how you fit into larger aims of whatever outlet you're supposed to be representing. and i think doritogate has shown just how much PR has a poisonous, controlling, deeply ingrained effect on much of the discourse that happens around videogames. any and all meaningful discussion is mostly channeled through talking about whatever the current 50-hour triple A game is, which keeps the buzz alive for these companies to sell them. even if a lot of games writers in that sphere don't think they're buying into that, it really feels like they're required to buy into it to even have a voice within that sphere.

and i'm sorry to say, but while i agree with much of your article, i think it also showed that you don't have much of an awareness is going on outside that sphere. which i completely understand! it's very hard to get anywhere near exposure and audience i would like just by writing in a blog and praying for some people with lots of twitter followers to retweet my articles. but i think it's of dire importance for these different spheres of game criticism to be much, much more closely engaged with each other, instead either not knowing or not acknowledging that one another exist. if we want a serious dialogue to happen, it has to come from all fronts, not just the ones we're used to seeing things from before. it is really frustrating, to me, to not feel like i'm being acknowledged as part of the conversation, and not feeling like what i'm saying is penetrating beyond a very small sphere because i'm writing on my own blog. i know why this is, but i'm not sure what i can do to start to change that, short of emailing a bunch of journalists like you and trying to get involved in a conversation.

i really, really want the conversation to change. there has to be something newsworthy beyond the discussion of current triple-A games with maybe the occasional indie title thrown in. we need brutal honesty more than ever, and i have serious doubts whether the position that the PR machines have put much of games writing in can really allow for that at all.

she then (very graciously) asked me if i wanted to make a reading list of good game criticism as a kind of rebuttal to post on her blog, so i did. here's the article, with a little introduction from that email:

i'm going to break the list up into individual sections that'll hopefully be more clear than a massive link-dump. this is not meant to be a completely comprehensive list of valuable writings about videogames, only a collection of interesting trends and themes i've come across in recent writing. take from it what you will, and i'm open to suggestions.

the idea is to try to find different themes in current criticism so we can see the connections and the interactions between people and media that may seem otherwise completely disconnected. if nothing else, hopefully this will serve as a useful starting point for people who are not insiders but want to understand the different kinds of debates that are starting to emerge in this sphere. of course, this is all filtered through the warped perceptions of one missus elizabeth ryerson...
Posted by Liz R at 11:22 PM 0 comments