here i go, trying to Write Something For A Website again.

but those words - they don't come. words that do come, come slowly and unsurely. with trepidation, i try slowly rolling back over doing something that seemed to come so easily before, but i hardly get anywhere. shoveling ground that can't be shoveled anymore. the ground is hard as rock, all frozen over. things look strange and different now. i see people i don't recognize, or their faces seem to have changed somehow. the landscape is strange and alien. i feel sick all of a sudden. i get more headaches. i'm unsure what i was really saying or building up before was of any good use, or if it wasn't just me puffing myself up. wasn't i just hoping for something, some recognition? something to get me out of the hole i'm in? someone to save me? ...huh? where am i? what is all this?

hey, here i am, somewhere, so i might as well try. what else do i have? survival comes before all else, in a panicked frenzy. nervously laughing at the sun and the sky, hoping they don't catastrophically fall. and yet even survival is just barely met. the light is much too bright outside for me to look at for very long.

i get images, like this image that keeps coming back from the beginning of episode 2 level 4 of Wolfenstein 3D: 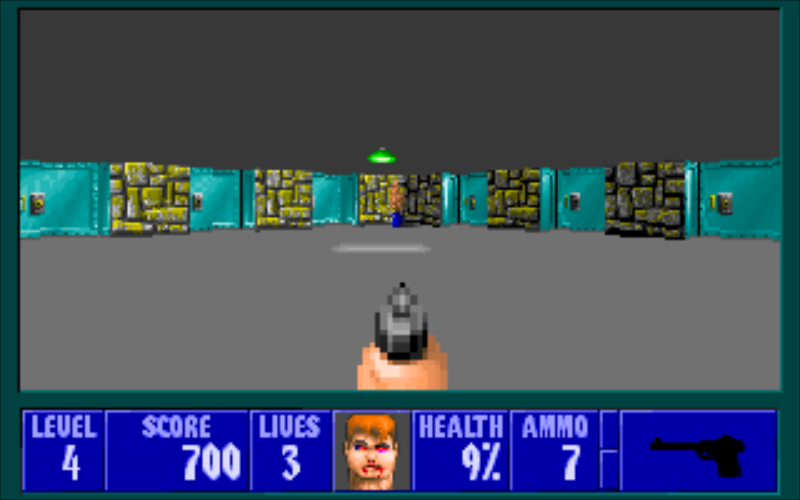 hahaha, you're so stupid for thinking about this. but you would. your mind would go there, you little bitch. you're so pathetic. what about all the people who didn't have what you had, you fucker? they didn't have fucking videogames to escape into. you and your fucking simulated memories.

in this particular area, there are two sides of the hall, yet i specifically see the image of the left side in my mind's eye. the left side is where the exit lies, and on the north side of the map. is that what it is? an interesting opening idea, and certainly memorable because of the zombie you shoot at the start (off-screen). is it that zombie? he's evil, he's scary, he's unknown. he's grotesque, and he only appears at times. the slimy vines on the walls are an unknown. or are you confusing the green slime on the walls with the vines on the purple walls in the game? those vines, they're a representation of something, something else. they tell me something else. they're telling me to think, but i don't want to think. hahaha, that's not true, i say. i'm better than this. i will not let it get me down. i will not do this again. i refuse. i'm putting my foot down.

but then, inevitably, there's an unbearable darkness - one that i keep wanting to cry when i try and think about it too deeply. it's not there when i look back at it now on the outside, but it's still there somewhere. i want to point it out frantically and shout that it's there. why can't anyone else see it? where is this coming from? i remember that specifically playing this level is attached to a traumatic memory of mine. a dark time, dark thoughts. one that i would rather not explore anymore. one i would rather not think about. the barbed, scaly tendrils of time close up around it and rapidly overtake it in a dark fog as i recede outward from it. i cannot smile and act like i'm still there, that little child. the sadness comes, and it is overwhelming. i have to close the door after too long.

over time, things should fade. and yet here it still is staring me in the face, just as intently as ever. i can't even crane my neck to look away for a second. it is bolted in place.

it's not just this space, it's all of them. they're all there. episode 5 level 4, the completely symmetrical level. haha. the beginning. mister officer. the police guy, the fucking blue one. he has a machine gun. he's gonna shoot me. more and more of him, the same everywhere. always the same. but they're just meat. not even meat, digital meat. weird, funny little impulses. they don't mean anything, really.

what are these spaces? why are there here? i look for a reason, but none comes. i cry at the infinite abyss, and people laugh or are confused, or they laugh, confused. they don't know and they never will.

it's not about me. it's about something else entirely. product worship. so pathetic. no real memories. no real hopes or dreams. always inside a machine. always living life inside a machine, because outward life doesn't exist. it's horrible. you're just part of a fucking stupid culture. a fake fucking culture. a subculture. don't try to look for support, cause you're not gonna get it. don't try and understand, because it can't be understood. it's all about anger, and product worship. it's all about the hatred, and the gnashing of teeth. the beast that snarls and howls and pulls apart the flesh those that get in its way. those people fight for their simulated memories tooth and nail but you can't fight for yours, because they seem so stupid and indefinite. so silly. so ridiculous. so childish.

try to resurrect, rebuild. reconstruct these memories. try not to laugh at myself for how silly this all is, and how silly i am. how stupid must i be. i can't speak, not like i used to. instead of grasping at anything and everything i can, the truths now seem to float above my head, loudly proclaiming themselves and i am overwhelmed. hahaha. i can't. the thoughts come - indefinite, incomplete. unsure how to manifest themselves. dancing a strange little dance. sometimes violent. sometimes they calm down for awhile and let me look at them.

take your memories and your pain and hastily paint BLAH BLAH BLAH BLAH over top of them until you can only see little bits and pieces of those partially obscured memories, with smiley faces drawn all over them. Winking Emoticon, *nudge* *nudge*, you guys. boy howdy, will you look at that. i don't want it to be this way, but it is undeniably this way. here you are a part of this world, this infinite series of little uniform patterns and grids, shuffling along, gradually erasing what was underneath and starting the same pattern anew.

and so, take all the complicated emotions you felt and try to distill them so that anyone in the world will understand. don't hope that anything will be maintained in the translation. don't even try to be true to them in the first place. no one will understand if you do. they'll squint their eyes slightly in the way they do and cock their head, perplexed. they must be feverishly following those shuffling patterns, hanging on for dear life. "huh? wtf am i reading?" wtf is this bullshit?

tell me you're crazy, maybe then i'll understand. you say this to everyone around you, silently. they don't hear it, even if you say it.

but that's because it's all been taken over, isn't it? it's all been colonized. colonized memories. digital support groups sponsored by Pepsi and Mountain Dew and Doritos. evil entities that cannot help themselves. digital lions. big square machines on a strict schedule of complicated circuitous routes that take in and poop out at an alarmingly fast and strange rate. their patterns appear so erratic and convoluted to look like they cannot possibly be maintained, yet they somehow are for the time being. and no one notices, or wants to notice. snack like you can never snack again, because it's no more, that space is no more. it's just a memory, that's all.

and then, proud statements i make come back to me. i see myself as silly little thing. a silly, sad little thing. it's all a lie. what a joke. but maybe there's also something there. maybe they can't see. maybe they never will. you tear up slightly thinking about it. maybe that's all there is.

it's time for you to do something, but what? tell the world? what? what do you have to say? what will it mean? what ways can it be aggregated and related and complicated and juxtaposed and rearranged? what conceptual frameworks can you be made to fit into? what trends are you seeking? what is your target demographic? where is all of this going? why am i reading this? why is this on my feed? who are you? why should i care about this? when will you ever stop being this way? what headaches are yet to come, ahead of you? what people are you yet to deal with in this arena? where will you be in fifty years time? where will you be in one years time?

it's all a mystery. just a mystery. not something you can even think about, or pretend to think about. you entertained a notion of it before, but that is gone. it's not for you, not your life. you strongly suspect it isn't really anyone's life either. probably not. yeah, that's a good thought. that's progress.

Email ThisBlogThis!Share to TwitterShare to FacebookShare to Pinterest
Labels: essay, me, videogames, wolfenstein