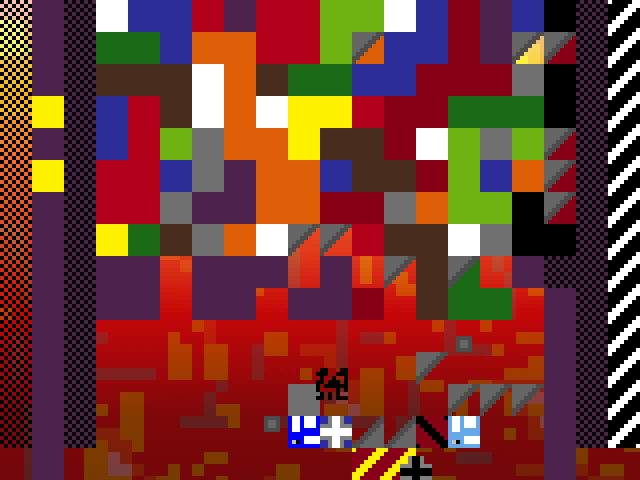 i swore to god i would never make a fucking puzzle platformer.

2d mechanics-based platforming games are a punchline now. they're the cliche of indie games, best demonstrated by each of the three games covered in Indie Game: The Movie, which all fit very snugly into the category of what my friend Anna (Anthropy) calls "white dudes trying to remake Mario". i love Mario but am personally tired of all Nintendo did to establish games as consumer products marketed at kids and then the subsequent stranglehold Nintendo holds over any and all gamer "nostalgia". it strikes me as a disrespectful, abusive, parasitic relationship to have with the loyal fans of your (often really neat, admittedly) games.

i still felt like there was some interesting territory to explore with a 2d platformer, but it's been mined so heavily by so many games that i felt like other avenues needed to be explored so much more and i didn't want to touch it any time soon. honestly, it just felt a little boring and pedestrian of a way to present a game. i feel like the short era of the dominant indie puzzle platformer is, if not dead, at least on life support - and i am fine with that, honestly.

i would like to say i had some divine change of heart that led me to working on a 2d platformer, but that's not true at all. i've been trying to phase out of indie game stuff and into some sort of music career because i'm finding the environment of indie games as one that has many serious holes in terms social or artistic or human enrichment for me. and i say that having met a wonderful support network through people involved in games, and having met several wonderful, talented people who are taking things in the right direction. but i'm tired of seeing of people go apeshit about the supposed deep meaning in things like Bioshock Infinite, or even supposed socially progressive crap like A Closed World. i understand that making a socially aware game is at least one step in the right direction in a culture that's so hostile to it, but i think we could do so much better. and that's what motivates me to keep trying.

making anything vaguely larger-scale was not something i had any plans of doing. i made a game with my friend Andi McClure for last ludum dare called Responsibilities that i liked, but it never went anywhere after that weekend. i have so many friends who make games, and i knew i had interesting ideas and could do it, i was just anxious about learning the tools. it felt kind of insurmountable. and i've made levels and stupid little small games, so i'm not inexperienced. i wanted to prove to myself that i could make a game all by myself for ludum dare, and that was really it. i started to learn stencyl and quickly discovered the thing i could do the most effectively was a platformer, so i went with that - and it ended up fitting in well with the idea i had for an art style from some random ms paint sketches i'd made.

when i started out i had a fair deal of disdain for the "clever mechanics" style of design and knew that i wasn't going to have time to come up with puzzles that would make sense anyway, so i decided to focus more on the environments and the feel of the game. it ballooned up into something much bigger than i expected, but it ended up fairly self-contained thing that i was pretty pleased with, given the time constraints.

after ludum dare was done i decided i wasn't really happy with how the game ended up. it felt a bit shallow. sort of like you were getting a nibble on little pieces of candy, but i wasn't providing enough nutrients to anchor the experience. i initially decided to make a "lost levels" version where i just took a figurative dump all over the carefully constructed mood of the previous levels, but then realized that it would make complete sense to make them part of the same game. and, one very long month later, i managed to finish it in time to submit to the IndieCade deadline today. i am very pleased with this, given the time constraints and everything else. 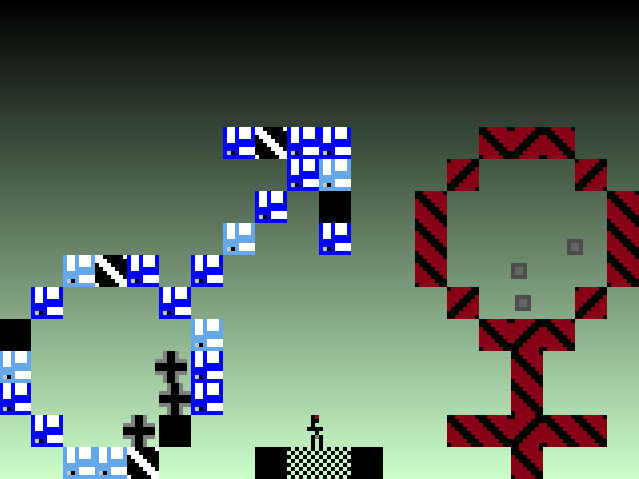 i feel like a lot of us go through our lives pushing all the fear and negative emotions we experience back into a very dark corner of our consciousness, like old junk we want to forget about collecting dust in the attic. those things might not be in our immediate field of view, but they're always there coloring our experiences. this is a game about exploring those spaces.

the game has a lot of puzzle elements, but it's in some ways what i'd like to characterize as an anti-puzzle platformer. the puzzles make sense in an overarching narrative context, but not necessarily outside of that. and that's the point.

i don't want to say much more about the themes of the game, because the game is really about the experience you have playing it. i'm tired of the culture of endless talk and i don't really like that we expect people to talk at length about why their game is meaningful to get people to even be interested in it. i will say that issues of gender roles, rape culture, and the destruction of the environment, among other things, are very important to me and therefore a part of the game.

so the game is not up front about its intentions like Cart Life or Unmanned (winners of this past year's IGF and Indiecade, respectively), but it's not meant to be taken as completely weird, crazy randomness. it may not look like the image many have of a "meaningful game", but it is still a game about humans - just in a more abstract, ambiguous, videogame-like format. the most conscious inspirations are probably the films of Stanley Kubrick and David Lynch (particularly The Shining and Inland Empire). both of those filmmakers are excellent at structuring scenes where the viewer has to interrogate what's being shown to them onscreen virtually every second in order to form their own sort of narrative understanding of what's going on. this is a thing i barely, if ever, see in games, but want to strongly encourage players to do with this game. hence the pun in the title (on the word "problematic"), which hopefully provokes some people to question what they're seeing in the game.

the more videogamey inspirations were the strange otherworldly platforming of Jill of the Jungle, the exploration horror and huge geometric environments of Yume Nikki (my favorite game, and one of the few examples of a game that's story is buried under the surface in abstract environments), and the puzzles of Braid. the visual feel of Problem Attic is partly inspired by cryptic atari/c64 games and glitch art.

i'm not sure if people will find the game insightful or dumb or pretentious or whatever. i just released the game and am already feeling weird about the fact that i inadvertently made the kind of game i'm trying to push against (2d platformers), but i at least got an opportunity to make fun of some of the cliches of the genre while still making a fairly artistically ambitious game. i am also very happy that several of my friends really seemed to dig it. i don't know how well it'll be understood, or if it will permeate beyond my immediate sphere, or if people really want to care about another fucking puzzle platformer (i wouldn't blame them for that at all). either way, i'm glad at least some people are getting something meaningful out of the experience.