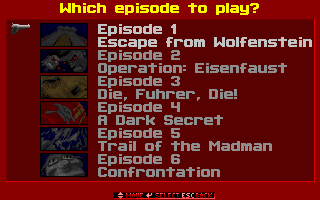 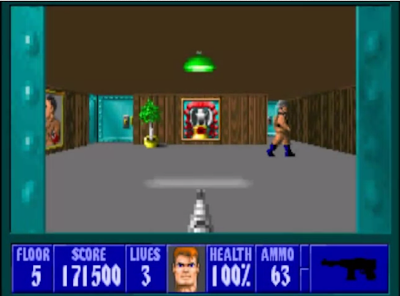 the beginning of level 5 drops you right in the middle of a difficult situation. the starting elevator (point 1, in pink near the green arrow in the map below) is on a little panneled island that sits in the middle of a cross-shaped room. from your view (shown in the screenshot above), all that can be seen is a guard moving to the right of the screen and then two doors - one to the left, marked by a plant, and one to the right that is set back to create a little alcove. most players, like one in the video here, will immediately shoot the guard. his surprising result is the yelps from several other guards who are right behind him. not knowing how to manage the situation, some players (again like the one in the video) will panic and stay put in the same place and hope the guards come towards them.


as seen there, it's not safe because guards can come from either side to shoot at you without you seeing them. other players might try to whip around and run straight into the fray, shooting all of the guards, but it's very difficult to pull off without getting hit several times.

the best solution is to run into the alcove for the door on the right and then turn around. the alcove gives you a long enough buffer to where guards can't hit you from the sides, so you can safely pick them off once they enter your field of view. you can see this done on the second attempt in the video at 1:51.


before i talk about one other section of the level: the silver key area, i'd like to mention how quickly the player in the video picked up what he was supposed to do. he knew that he had only 8 bullets and the slow-firing pistol, so he knew he had to find a way to manage the situation. this guy shows that's he's probably a person who plays games, because he understood very quickly how to manage the situation based on the memory of his failed first attempt. i don't need to point this out all of the time, but this a great example of games as a language - of acting based on the systems of the game and the information you're provided with. here is an example of a complex situation, in a genre that is often seen as stupid. there's a degree of intelligence that goes into understanding and making it through a games like this, one that most people probably ignore because it happens so instantaneously.

this map has many other areas worth mentioning, but the silver key area is its heart. the first part of this area is inside the door on the left of the player's view at the start of the level. the room's shape is essentially a rectangle with two wooden islands in the middle, which are patrolled by dogs, and several tentacle-like passages that all lead to alcoves with doors at the end. you enter from on the top left corner of the room (point 2), and most of the tentacle-like passages are on the opposite side, bottom-right-ish, though there is one on the top right (point 3). once you enter that door (which you can see the player doing at 4:15 in the video) you see a couple dogs running in the distance. dogs in wolfenstein are fast but easily dealt with from a distance, so you can wait for all of them to run towards you and take them out one by one, as he does in the video. once you move further, you'll encounter a single hidden guard, tucked away in alcove close to where you entered. it's a surprise, but pretty easily dealt with.

further exploration of this room lets you know exactly what you're up against, which you can see in the player comment on at 4:30 in the video. though the layout looks fairly simple from the map, the fact that the two islands look the same as the outer walls means that there's no way to tell where they end without exploring every bit of the room. the tentacle-passages just add to this unease, because there's no way to know what they might lead to. this is confirmed when, upon further exploration, you find no other guards tucked away like the one you dealt with before, only doors at the end of every single passage. given how big the room is, and how empty it was of enemies (at least on all but the hardest difficulty, which stupidly puts two officers in that room), if you're observant, you might correctly guess that this is foreshadowing a very difficult situation. but there is one seemingly safer option, an alcove on the top right corner of the room, that looks like it might lead somewhere else (3 on the map, the player takes it at 4:35 in the video).

in reality, in a very confusing layout not often utilized in the game, all doors lead to the same place. that place is a room with 6 entrances that contains the silver key (bottom right of the map), but is stuffed with too many guards to try to take on at once. the many alcoves and doors mean that the guards, once alerted, have several different ways to walk around and shoot you from behind or to your side. in the second video below, you can see the player forget how to deal with a situation he's been through a couple of times before. instead of going down the upper right alcove he did at 4:35 in the first video, he tries to take it head on by going through the last of one of the three tentacle-passages leading to doors.


this is a more direct route, and he has plenty of ammo and health to handle the situation. he's able to take out a lot of guards but he doesn't count on any pursuing him to his side, which is exactly what happens. he manages to get out of the situation with very little health and ammo only by some luck and retreating back to point 2.

meanwhile, in the first video, the upper right door he enters leads to the same situation. but because the area he entered creates a larger buffer between him and the guards, it's a little more manageable. though it's still possible, he at least has more time to wait for guards to filter down the path in his view at 4:49 and pick them off one by one before being pursued from behind.

of course, the confusing layout means that not all guards will filter down - some will enter whichever one of the many entrance doors is closest to him in an effort to pursue him. but at least if they come from behind, he has an easier path to the key - and the health, that lies in the center of the room. he veers from that and takes kind of a dumb risk at 5:09, which allows and officer to move in on his right side, but he's at least able to take the guard out and make a successful run for the health and key.

this scenario provides no easy method for dealing with it, but there are at least more manageable ways. here we can see how the same player puts himself into a bind by not remembering his previous path and running headfirst into a situation he's been through before, whereas the first time through he reads the visual cues better and approaches it more cautiously. this is definitely a level that demands you treat it with respect, and the situation you're put in is pretty far from the kind of easy, gun-blazing empowerment fantasy that fps games can be seen as.

here we can also see a player who says at :30 of the first video, probably having played many RPGs before, that he wishes he could interact with people who tell him where to go. that comment alone brings to attention how different Wolf 3D is from most other games. in many ways i think the game has gained back some of the mystery it had when first released. Wolfenstein 3D's story is only the experience you have with the game, not an interactive narrative. there are no hints or tutorials: everything that's been placed in the level is just there, and you have to learn, as a player, how to deal with it with the tools you have. never does it feel like the game is just pushing you through a scene to further story. not that i'm against interactive narratives. but the mystery makes the experience more powerful, and memorable, at least to me. i mean, why else would i still be thinking about a level i first played probably 18 years ago?