i did a short essay for the 20th anniversary of Wolf3D over on Midnight Resistance. it's more about memory than the game itself, but i'm pretty happy with it. let me know what you think!
Posted by Liz R at 7:29 PM 0 comments

the 20th anniversary of Wolf3D is this month. to celebrate, John Carmack did a commentary of the game on youtube! i've embedded it here:


in conjunction with the commentary, they released a browser version of the game at http://wolfenstein.bethsoft.com/

sadly, only the first three episodes are available. and the graphics are a little blurry, presumably for speed reasons. but it's definitely worth checking out!

more adventures in level design articles will be coming soon!
Posted by Liz R at 12:38 AM 0 comments

Email ThisBlogThis!Share to TwitterShare to FacebookShare to Pinterest
Labels: wolfenstein

reposted from Robert Yang's blog (with some edits here and there)

i'm still reeling from my first time at GDC. on the one hand, i felt it was some sort of dream come true. it was this far-off ambition of mine to go to GDC, and i actually made it there! but now that that feeling has worn off, i still can't get over how upsetting it was to feel like a spy into an event based around a thing i've loved my whole life. i know that most people who work in games probably got into it for the same reasons i'm getting into it. these are people who have chosen to devote their lives to videogames when they could have chosen a much more "serious" profession, which is very honorable (of course i know plenty of other people get into it because it's a business that makes money). and it's not as if my love of games is better or more pure than theirs because i'm an "indie" and they're not, because it isn't. some indies may honestly believe that, but i really don't.

there's just a barrier that exists because of the culture. even though i grew up among people who lived and breathed games, and idolizing game industry figures, being in that world is now far outside of the realm of possibility for me. it requires buying into a set of values that i can now see with clear eyes as hollow at best and evil at worst. i grew up, put games aside, got into film and other kinds of art, had serious life changes and went through some major soul-searching, and now i'm as far as anyone could be from being a part of the culture of videogames. now i'm an "other". game culture has no interest in me anymore - in fact, it's hostile to me, if it's even aware of my existence. i'm starting to understand how someone like Dani Bunten must have felt. what must it have been like to go from one of the most respected game designers in the world to a target of complete dismissal and hatred, forced to the fringes just because of one choice she made with her life?

seeing this is just another reason why i feel that i don't trust the culture and it's very difficult for me, emotionally, to call myself a participant in a thing like GDC (even as an "indie") without feeling like i'm part of the problem. i don't want to be part of a culture that empowers misogynists, bullies, and bigots, even if it is based around a thing i love. i see an underlying emptiness that seems to color every action of the people involved with videogames now. how much do people who are part of this culture really know or understand about other human beings? probably not a lot.

i guess that's why i find this whole thing disturbing. what has happened to cause these barriers? what have the games, themselves, been doing to contribute to that? why am i in such a different place than all of this now? is this really something i want to support, or be at all part of? i guess it's just a reality that most people who have been around GDC are well aware of, but this year it was entirely new to me.

i am glad about the constant debates/arguments that happen in indie circles. it's extremely important for people to be able to air their frustrations in an open setting and have them not completely dismissed. that's why i hate it when some of the more successful indies dismiss oftentimes valid complaints as just jealousy.

i am a bit scared, though, that a lot of indies don't seem to embody any values that are different from the ones espoused in the industry. many are still in it to make a product, even if there's a bit more personality in that product. i feel like that's why there are a lot of games based around mechanics-based gimmicks with values that are no different from those of triple-A games. it starts to feel like they're just there to be a selling point for the game and not so much to break new ground. and then on the other end, if something as agonizingly heavy-handed as "Dear Esther" is what most people see as a deep, emotionally-resonant experience than i think we have a long way to go on that front as well.

but at least some sort of alternative exists now. and there were also many bright spots at GDC; "Proteus", "At A Distance" etc etc. are a very good indication that things are starting to change, even if it's not a change i could have any context for on my first time there.
i am also glad that people are taking Anna's book seriously - that's one step of many needed to make a world of videogames that i might actually feel proud to call myself a part of.
Posted by Liz R at 6:24 AM 0 comments

Email ThisBlogThis!Share to TwitterShare to FacebookShare to Pinterest
Labels: GDC

Email ThisBlogThis!Share to TwitterShare to FacebookShare to Pinterest
Labels: music 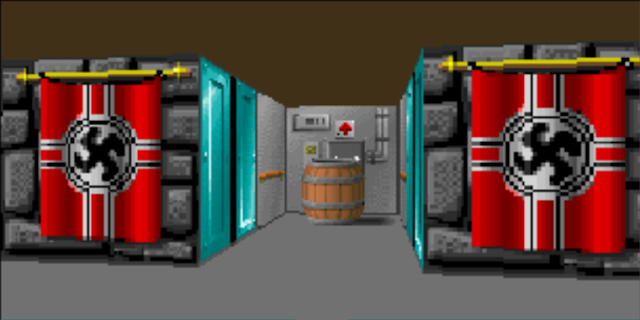 "atmospheric" is a popular staple word of the gamer vocabulary. i have seen it in so many magazines and websites over the years that it seem like it's ceased to have an actual meaning. i only imagine it being sincerely used now as an item on some checklist game companies have, like "necessary features to add before shipping". a buzzword, if you wanna call it that.

i feel like we've come to a point where the popular understanding of what that word means, among game designers, is making an environment evoke emotion by adding a lot of manipulative, gimmicky features into the game. this is very far from the "atmosphere" of a Silent Hill 2, or Ico, which is part of the core of those two games.

so i'll just compromise and say that "atmosphere" is the word that gamers use when they want to describe anything in the feel of a game that fits outside the gameplay mechanics. that's an awfully all-encompassing term, but i think it has stayed that way because explaining all the ways an environment can affect a player is an impossible task. not to mention that there's so little critical vocabulary for games, and so few people who are even interested in looking at these things in any detail.

with that in mind, i couldn't write an entry about level 3 of episode 4 ("A Dark Secret") without doing one about level 5. this is the only level to make me cry out of utter betrayal. after looking through it again, i'm convinced that it's the closest thing the game has to a masterpiece. it's probably one of the best levels i'll ever write about, anyway. i say this despite it being totally manipulative and unfair. this is not unfairness in the sense that Kaizo Mario World, or I Wanna Be The Guy, or "challenge" levels are unfair. it's much more deeply unfair, because it breaks rules that the game previously lets on will never be broken. it gives you ample resources to beat it, like any other level, and then...it just doesn't let you. it's like it's saying, go back to the fucking Kill Hitler episode to feel good about yourself, cause you're obviously not ready to deal with what's going on here.

this is the level that planted the thought in my head, many years ago, that maybe some levels are just meant to be impossible. maybe they're just there, floating in space, not ever meaning to have a solution. that carried over into my experiences with DOOM. i had a friend in school laugh at me because i told him certain DOOM levels were supposed to be impossible. he said "why would the levels exist if you couldn't beat them?" he may have been right, but i still don't believe him.

the idea of an "impossible level", one that exists for mysterious reasons and never lets you beat it is ultimately a reason why i'm interested in game design as a thing. i'm so deeply angered by the idea, and that's why i find it fascinating. i'm going to go out on a limb and say that this is probably the level that inspired the careers of many game designers, at least if we're going by amount of keyboards smashed.