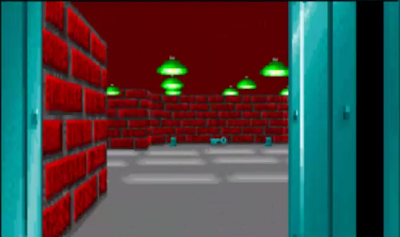 episode 4, "A Dark Secret", is the first episode of the "Nocturnal Missions" (d'ya get the pun? eh? eh?). unlike all of the other episodes, it has no easily distinguishable features. a couple of new walls are introduced, but only one of them (a weird light brown stone/cave wall with lots of blood splatters) is used more than once. it may seem mundane to mention the variation in wall textures. they're such a huge part of what defines the feel of the game, though, that their impact can't really be understated. the brown wall, especially, contributes strongly to the feel of an episode. still, i couldn't easily sum up what this episode is about, or how exactly all the levels are tied together. 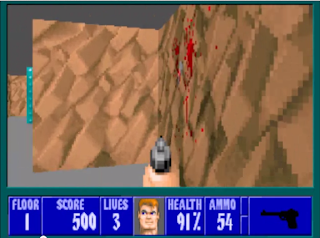 i intially ignored episode 4 because of the relatively uninviting first level. after a pretty entrance room, it wastes no time in plunging you into a series of bland winding passages to get the gold key and exit. the mazes are short, but they seem to already put you in a couple agonizingly claustrophobic situations. looking at the level now, the way both of those passages are introduced with bright lights seems almost too perfectly surreal. at the time i didn't like that feeling, so i guessed that it must be representative of what was to come. in a way, i was right, but the episode also makes many so left turns and breaks design taboos the game went to a lot of effort to previously establish that it's impossible to categorize. this is where you can see Tom Hall, the designer of all of episode 4 (and a majority of the Wolfenstein's maps in general), starting to shift away from trying to make realistic-feeling environments, and move towards a kind of a surreal farce on his previous realistic levels. many odd chances are taken, design-wise, and some work much more effectively than others. the effect this has on you as a player is definitely disorienting. though looking back, i think having the rug constantly pulled out from under you makes this episode a lot more representative a depiction of the fevered, all-encompassing cruelty of the Nazi regime than previous ones. Brenda Brathwaite, when she absurdly quipped off-the cuff that Wolfenstein was about the Holocaust in a talk in her "One Falls For Each Of Us" series, might actually have been onto something.

here i think it would be easy to dismiss some of the design decisions made in the later part of this game as poorly thought-out relics of an older style of game design. that seems to be a dominant philosophy in a lot of game design theory, and one that i'm trying my best to stay as far away from as humanly possible. certainly fairness is very important if you want the player to feel in control of a situation. Wolf 3D even does this to an extent by letting you save at any point in any level and giving you the choice opt out of a particular episode you don't like and choose to play another one. those may not seem like much now, but at the time being able to save anywhere was a luxury. more importantly, though, suggesting that all design must follow an established set of rules of "fairness" to the player would completely ignore its power to communicate more abstract, complex feelings than just how to reach the exit. what may look like a design troll on the surface often has a much more complicated effect on the player. this level contributes to that idea in just a few bits of surreal imagery.